IGN have released a detailed story on the much anticipated game, Hunt: Showdown and it’s development over the last three years. Here we break down the short documentary and talk about where the game currently stands.

Back in 2014, Hunt: Horror’s of the Gilded Age was first shown at E3, an exciting new FPS, co-op, randomly generated game. Back then it was more reminiscent of Left 4 Dead with fast-paced action and zombie hoards to kill with friends. However, shortly after this Crytek went through a rough patch, having to shut down their US studio who were developing the game. Despite this, the game was shipped off to the main offices in Frankfurt, to continue production.
Dennis Schwarz, Lead Designer at the Frankfurt offices explains shortly after the game had moved “it took us three to four months to look at the game and the potential of the game, getting into the designs and implementation. Seeing to what level we could take it. There was a game there, it was just a very different game to what the core competency in Frankfurt has been.” 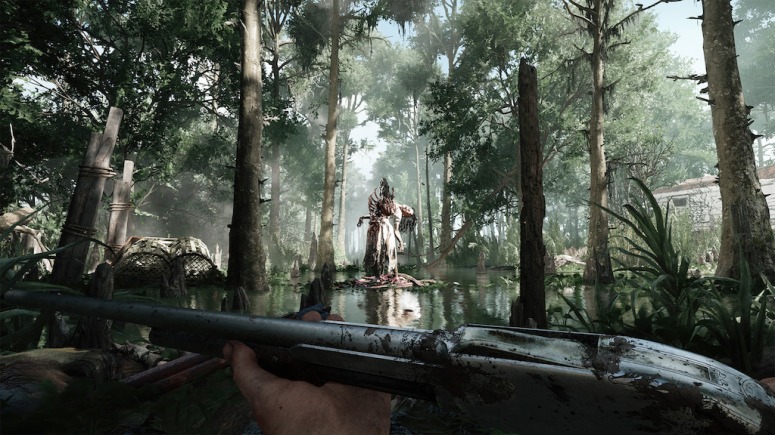 Ultimately, this lead to the Frankfurt studio going over their previous releases and deciding to make the tough decision to reboot the game, keeping the same name. Schwarz stated, “it is a hard decision to make, and it was not one we did very lightly.” He goes on to explain the reason why different studios from the same company may create differing games; “You have to match the project with the team, and if a team brings a certain skillset but a project requires a different skillset, either you need to now adapt to that which means you need to hire specialists that fill the gap or we train people, or you change the project.”
Taking this into effect, the team explain that the game needed to maintain tension, and not just by dropping in the overused jump scare every now and then. You must rely on your senses in this game, looking out for the slightest movement or faintest sound. You can work with or against other players, stalking a team to steal their hard-earned rewards or teaming up with friends to hunt down monsters.

The PvP aspect of this game isn’t as direct as most, as you can choose to team up with people or not. Additionally, the bosses of the game leave trails you can track, however these will be the same trails every other person on the map is tracking. Strategy is key in this high-tension game. With such a dynamic environment, a flush of crows rising into the air could mean another player made a wrong step, or gunshots and flashes in the distance could mean you’re in for a fight. Much like Dead by Daylight, the game employs a proximity system with voice-chat. If you are too far away from your team, they won’t be able to hear you, but someone else might.

Killing the boss is the end game for most games, but not here. Not only will a boss fight create a lot of noise, but once they’re dead, you need to send them to hell. This takes time, and as you’re doing it all other players on the map are alerted. Everyone wants to get the ‘token’ the boss has dropped, so the hunter becomes the hunted.
Set in the last half of the 19th Century in Louisiana, with a vast open world map, we’re extremely excited for this game to come out; as of this article, a release date is yet to be announced. This may be the fresh take on PvP horror that we need in a market saturated with many clones of the same idea.

Did the 2017 E3 demo for Hunt: Showdown excite you? Will you be playing this game on release? We sure will, so make sure to tweet us what you think @JenChauMedia.